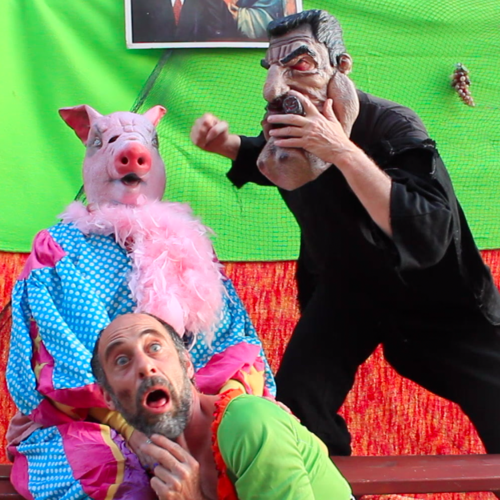 Visit the ancient Greek Isle of Lesbos via a French Romantic lens: the romance of the great Bardess Sappho with her student priestess Mnasidika as told in her own words, translated from Greek by Renée Vivien at the Belle Époque. Bilingual French/English nude production with sensual operatic chants, exotic dancing and of course, resplendent Vulvas celebrated as masterpieces of living art. Starring Jocelyn Woods, Brielle Barker, Scorpiana Bara, Katelyn Paddock, Josie Ramirez, Jackie Sage Longe and more! This show is a short preview of Woods’ full length semi-opera, Odes Sapphique: Isle of Lesbos to premiere spring 2020.

Jenna Emerson, Anthony Apodoca, and D. Trigg (aka, “ETA”)ETA are totally reckless performers and Vermont’s, NAY - the world’s only improv comedy team with a “safe word”. They constantly do things that break “the Rules” of improv and no self-respecting improviser will play with them. So strap in and get ready to laugh because anything can happen when you’re watching ETA!

Crazy Shade of Winter is a multi-genre solo performance mixing tragicomic improv, drag/burlesque, storytelling, singing, and digital projections. acting in the drag persona of Tonya Heartache, i explore my own story in connection with Tonya Harding's, working through issues of poor/working class femme identity, surviving abuse and trauma in family and relationships, the pitfalls of aspiration and "fame," and building role models out of anti-heroes. throughout, i shift in and out of my own story and Tonya's, our stories and lives intermingling, as a slideshow of photographs and visual + digital art play on screen.

Dance through time and watch evolution transpire before your eyes; a multimedia production including a live band performing an original score.  phinneus sonin is a local eccentric, shop provaror, and performer of ConArt. He’s using you as a guini pig for his experimental performance and is not to be trusted. I would run out of the theater and save yourselves before it’s too late...

Pierre Vachon is a pro wrestler with 20 years of crazy stories.. This time around he reveals all about his time on the show Shot of Love with Tila Tequila!

Kamikaze Comedy is a quintet of middle-aged improvisers who are terrible at marketing. Founded in 1995 as a splinter faction of a perfectly lovely theatre company any normal person would have been proud to be part of, the troupe maintains buoyancy through a lazy form of haphazard self-government and sporadic performances. After years of simply appearing at a venue and making stuff up, the group recently deluded themselves into thinking they wanted to memorize lines again, and have written a small slate of sketch comedy. For tonight, though, buckle in for their forte, freewheeling “short-form” improv comedy.