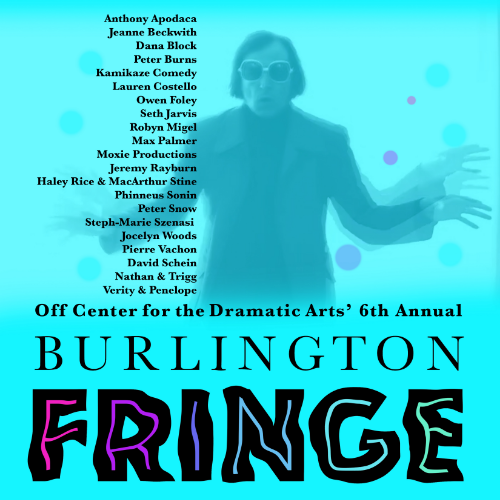 The Al Cushman Saga – Solo by Steph-Marie Szenasi: In this mixed media performance piece, Al Cushman, brought to life by Steph-Marie, confronts the “big fish” as a rides mechanic at Marineland in 94’. He muses his way through hideous pranks with a brown pop in each hand and a cigarette.

Lucinda and the Wolves by Robyn Migel, performed by Sandi Milne. The audience becomes an addiction recovery meeting where Lucinda is the featured speaker. She takes us through the traumatic journey of her life story; an inappropriate relationship with her stepfather, drugs and alcohol and working crazy jobs such as having an arrow shot off her head in a variety act and doing internet stripping.

The Life of a Famous Nobody - presented by Vermont Comedy Outlaws. Pierre Vachon is your typical Pro-Wrestler/Body Piercer/ Stand up comic/DJ and leathersmith.. listen to crazy road stories from a life on the road.. from MTV to everything in between.

"QK Enchaine" (Queen Kong in Chains & Fishnets) written and performed by Dana Block. Fresh from the New York New Work Theatre Festival, Dana Block brings the next installment of her on-going QUEEN KONG series to the Fringe Festival. Nazi film-maker becomes Queen KONG, in an attempt to reverse her racist legacy and cement her place in film history by capturing the little golden Uber mensch, the “Oscar. “