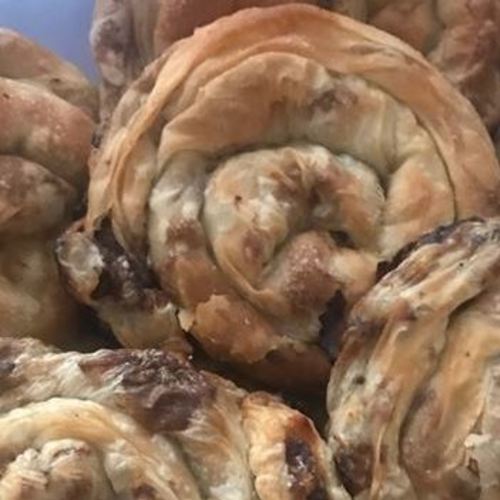 Pick up your meal, and take it home! This menu represents the traditional cooking of Mediha. She was born and raised in North-West Bosnia. Mediha has lived in Burlington for the past 20 years. Bosna’s (Bosnian) cuisine, like its language, has a base of South Slavic culture and tradition and has been influenced by many surrounding countries and far beyond.

Since their migration to the region around the seventh century from North-Eastern Europe, Bosnians learned how to sustain and quickly adapt and transform their lifestyles, culture and tradition; all while being constantly threatened, under attack, or besiege. Throughout its history, invaders and conquerors based on their cultural and religious beliefs made altercations to Bosna’s dishes. Bosna’s multicultural population, migration and mixed-marriages also tailored the cuisine’s local taste.

This traditional meal from Bosna includes:

Traveler’s Sataraš (Read as Sa-ta-rash), also known as Paprikaš (Pa-pri-kash) and/or Đuveč (Ju-ve-tch) - sauteed fresh seasonal vegetables full of flavors. The Sataraš flavor is a mixture of many spices: spicy, salty, sweet, bitter, etc. Served with creamy rice as a side dish. If mixed together with Sataraš, it would become Đuveč - similar to risotto.

*Note: All dishes can be made Lactose- free and gluten-free upon request. Please make any special requests by 7pm on Thursday, 10/8.

PLEASE bring your own bag! We will be assigning pickup times on Friday evening. If you prefer to come at a specific time, email [email protected], and we'll try to accommodate.