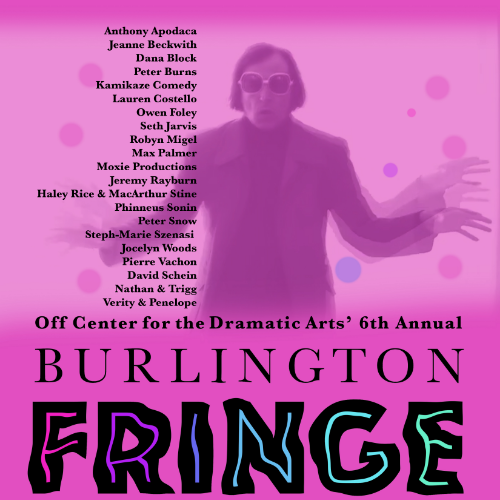 Dad Jokes – Seth Jarvis: A new-ish dad muses about parenthood and stays up past his bedtime.

The 20 min Radio Comedy Hour (Sponsored by Nanny Puss's Sour Biscuits) – Haley Rice and MacArthur Stine: Oh, crap! This radio variety show lost its entire staff, but the show must go on. Can two totally unprepared people save the day? Probably not, but it’ll be a hoot watching them try.

The Man in the Moon – by John O’Keefe, performed by David Schein. A street-person camped by a bus stop channels the moon and its power to show what’s real. John O’Keefe is an award-winning playwright based in the Bay Area who grew up in a series of juvenile homes, foster homes and orphanages. His work is known for its gritty lyricism. David Schein worked with O’Keefe for many years in Iowa and California and premiered this work in the Bay Area in 1983.

ouzkxqlzn – Lauren Costello: What isn't performance? A thematic exploration using music made with cello, guitar, vocals, tape, field recordings, and noise, of the emotional experience of the artist (intentional or not) as performer and the audience as participant. Using a collage of tape interviews and clips, live pieces, reflection, and response, this set explores the unique and interactive dialogue between artist and viewer with specific regard to intent, vulnerability, purpose, and outcome.

Orange– by Peter Burns: While dressed mostly in orange Peter Burns explores how the color has impacted his life and the history of how orange came to be a distinct color rather than a shade of red. He will tell stories about wearing orange as a lifeguard, the theory of the orange hand, his orange bicycle, finding an orange on the beach, an encounter with the orange people, his father's adventures with an orange hazard cone, his color based clothing system, trying to find a rhyme for the word orange, high visibility vests and the train that goes through Orange, New Jersey.

Longfellow – Nathan Hartswick and Daniel Trigg : This is a fully improvised piece, performed by two guys dressed in Shakespearean garb. Nathan and Trigg chat briefly with the audience, then improvise a 20-minute play in the style of the Bard. Nothing is planned; the entire work is created spontaneously, based on only one suggestion from the audience. Lovers, kings, paupers and fools are all played by these two fair gentlemen, to hilarious results. LONGFELLOW is a “Shakespearience” not to be missed!