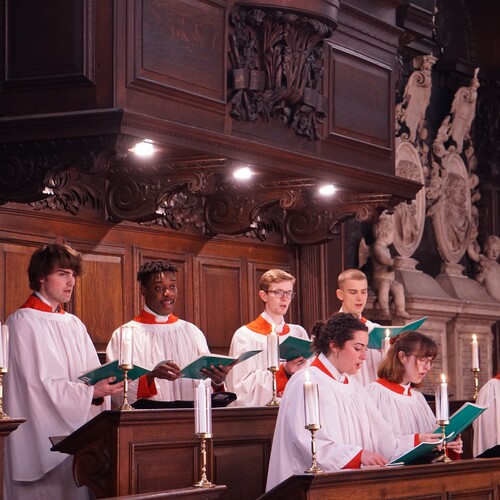 Christ’s College is one of the constituent colleges of the University of Cambridge, and has had a chapel choir since its foundation in 1505. Conducted by Professor David Rowland, director of music at Christ’s College, the choir sings a selection of music from English and European choral traditions from the 16th to the 20th century. The Choir's raison d'etre has, since its inception, been to sing services in the College Chapel. Choral Evensong is sung twice weekly during Full Term. More generally, the Choir makes an important contribution to the life of the College, singing at feasts, weddings, memorial services, and other occasions. Today, as one of Cambridge's finest mixed-voice ensembles, the group also pursues an exciting range of activities outside College, performing concerts in Cambridge and around the UK, recording CDs, broadcasting, and undertaking major international tours each Summer. Choir members are selected by audition either before or after coming up to Cambridge, and each is expected to be of a very high musical standard. Most hold Choral Exhibitions, and all benefit from regular vocal training. The choir has a broad concert repertoire. For this tour they are singing a wide range of music: Parry’s Songs of Farewell, Howell’s Requiem, Finzi’s Lo, The Full, Final Sacrifice, to name a few, maintaining a variety of music from both religious and secular traditions, ranging from Tallis to Britten. CDs will be available at the door during intermission and after the performance (cash or check only).

David Rowland was Organ Scholar at Corpus Christi College and as an undergraduate played regularly for services in King’s College. After graduating in 1978, he pursued research in Cambridge, and in 1981 he won the prestigious St Alban's International Organ Competition. The following year he was a major prize winner at the Dublin International Organ Competition. Subsequently, David became a lecturer in the music department of Glasgow University and then Director of Music at Christ's College Cambridge, where he has conducted the choir for the last thirty-three years. More recently, from 2002 to 2004, he conducted the Welsh National Youth Choir. In addition to conducting, he records, broadcasts, and performs on the harpsichord, organ, and early piano. David joined the staff of the Music Department of the Open University in 1989, where he is currently Professor of Music and Director of Taught Postgraduate Studies, having been Dean of the Faculty of Arts from 2007 to 2014. He pursues research into the performance practice of the early piano, the relationship between music and commerce, and the history of listening, on which subjects he has written five books and other scholarly material.

Tickets can be purchased online at https://sevendaystickets.com/events/104361 or at the door.

In order to keep the audience safe, we ask that all attendees be vaccinated and wear masks at all times. Thank you for your cooperation.