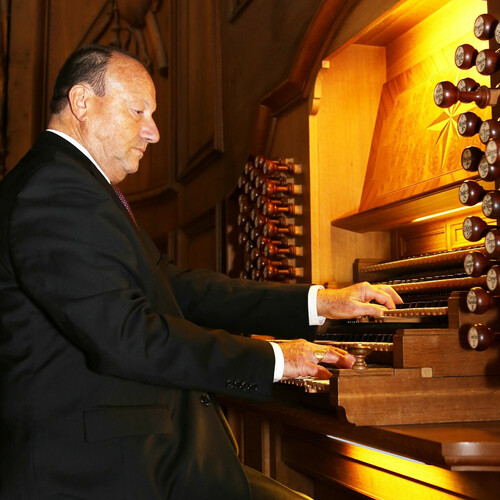 MAURICE CLERC joins in the continuity of the big French tradition while drawing his energy from the dynamism of our time. His numerous concerts in some twenty countries (28 tours in North America) ensured his international reputation. Traveling four continents for forty years, from Europe to Australia, he played in prestigious places such as Notre-Dame de Paris, Saint Patrick's Cathedral of New York, the Dom de Lübeck, the basilica Saint-Marc de Venise, an Oratory Saint Joseph of Montreal, the cathedral Saint-Paul of Melbourne, the auditorium of the N.H.K. of Tokyo or Cultural Center of Hong-Kong. In 1987, he was invited to give two concerts for the inauguration of the big organ Flentrop in the new auditorium of Taipeï. In 1999, he went to Seoul for the convention of the organists. In 2003, he was again in Hong Kong, then China, Mexico, and South Africa. In June 2019 he came back to New Zealand and Australia. In 2020, he was in Hong Kong and Japan. This international career has led him to perform in leading festivals such Bruges, Ravenna, Madrid, Morelia, Saint Eustache in Paris, Milstatt, Frankfurt, Budapest, Warsaw, Buenos Aires, and Montevideo.

Born in Lyon in 1946, Maurice Clerc was awarded a diploma at the Ecole Normale of Music in Paris where he received the teaching of Suzanne Chaisemartin. At the Higher National Conservatory for Music of Paris, he obtained, in 1975, a First Prize of organ in the class of Rolande Falcinelli. With Gaston Litaize, he pursued this course for several years and deepened the interpretation of the repertory of the 18th century in our days.

Finally, since 1972 he has had the opportunity to frequent the famous courses of improvisation which gave Pierre Cochereau to the International Academy of Nice. He won the Prize of Improvisation in the international competition of Lyon in 1977. Maurice Clerc is the Emeritus organist of the cathédral in Dijon after being the titular organist of this great instrument for 46 years from 1972 to 2018. He was also a professor at the Conservatory of Dijon and a lecturer at the University. Maurice Clerc recorded a dozen CDs, among them Bach and German baroque masters. But having built up a reputation in the romantic and modern repertory and considered one of the specialists of French music, he became attached to the promotion of the major works of Franck, Vierne, Dupré, Fleury, Langlais. His most recent recordings led him to present Cochereau and French transcriptions. Maurice Clerc is Chevalier of the Legion of Honor.

Andantino in A major

Allegretto in B major