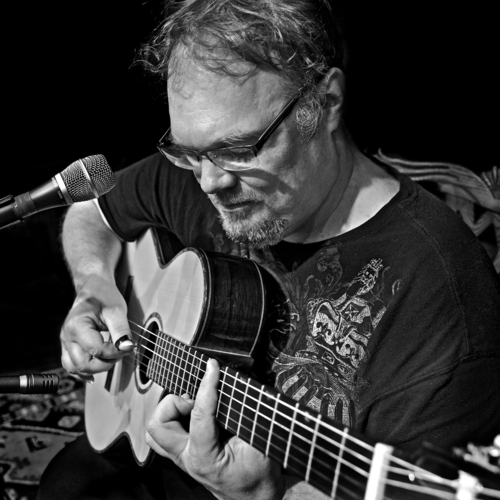 Don’t miss the opportunity on Friday, September 30, at the CVU Theater to hear one of the brilliant acoustic guitarists on tour today in a space beautifully designed for such a listening experience.

The show starts at 7:30, doors open at 6:30, and tickets can be purchased for $20 plus tax and fees, or at the door on the night of the performance with cash or personal check ONLY. We hope to see you there!

The story of 11-year old Richard Smith joining Chet Atkins on stage is legend, and foretold a bright future: British-born Smith had learned fingerstyle guitar listening to Atkins’ recordings, so when Chet played a date in England, it was arranged that Smith would join him on stage. Richard selected ‘Whispering Pines’ to play, and at the conclusion Chet, along with the 1000 in attendance at Her Majesty’s Theater in London, was so impressed that he coaxed the bashful Smith to return to the stage to play another song: ‘Little Rock Getaway.’  Atkins was so mesmerized that he stopped playing, stunned with Smith’s skill.

Richard Smith was born in 1971 in Beckenham, England, and began playing guitar when he was five, inspired watching his father picking the Atkins and Travis version of ‘Down South Blues.’  Richard says he remembers “begging” his dad to show him the fingerpicking style.  Smith was quickly recognized as a child prodigy, and it was only a few years later when Atkins would bestow high praise upon him, describing Richard as “the most amazing guy I know on the guitar. He can play anything I know, only better.”

Richard performed throughout the 1990s with brothers Rob and Sam in the Richard Smith Trio before marrying Julie Adams, an accomplished cellist, and moving to Nashville, Tennessee in 2000. Once there, Richard founded The Hot Club of Nashville, a band with a varying lineup that included John Jorgenson, Pat Bergeson, Bryon Sutton, and Stuart Duncan combining jazz and western swing, and a year later he won the prestigious National Fingerstyle Guitar Championship in 2001 at the Walnut Valley Festival in Winfield, Kansas.  Richard tours around the world with a repertoire that includes fingerpicking classics, bluegrass, fiddle tunes, originals, blues, ragtime, jazz standards and everything from pop to sousa marches. He has performed and recorded with Chet Atkins, Les Paul, Sam Bush, Stuart Duncan, Martin Taylor, and Tommy Emmanuel (who remarked: “If you like my playing, you should love Richard Smith! The world champion!”)

The National Thumbpickers Hall of Fame named Smith Thumbpicker of the Year in 2008 and again in 2021; he was inducted into the Hall of Fame in 2009.  Watch Richard performing Scott Joplin’s ‘The Entertainer’ on Youtube, with more than 12 million views, to see why he received the Golden Thumbpick Award from the Association of Fingerstyle Guitarists in 2011.

Visit richardsmith.com to learn more about him.