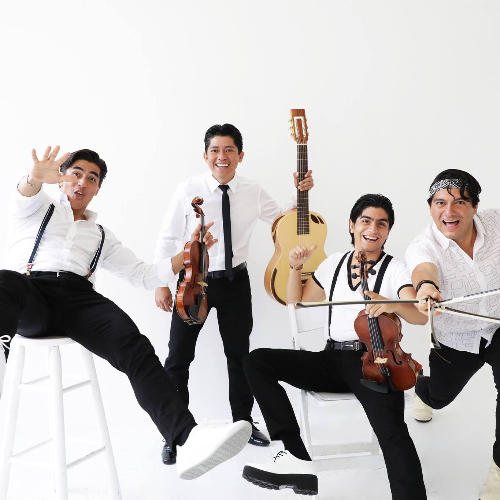 Join for an evening of music and inspiration with the acclaimed Villalobos Brothers from Veracruz Mexico sharing their music and message of justice and brotherhood. Doors open at 6:30 and food sales benefit Migrant Justice and BALE (Building a Local Economy). Migrant Justice will speak at 7 PM and the concert begins at 7:30.

BarnArts Center for the Arts in collaboration with BALE, and Migrant Justice present The Villalobos Brothers for their 5th Barnard appearance at the inspiring setting of Feast and Field.

Local audiences may be familiar with the Villalobos Brothers, and anxioulsy await their return! We're in for a special treat and a different performance than usual--the trio of brothers Ernesto, Alberto, and Luis will be sharing new music and different arrangements on the heels of their CD release in NYC.

After their acclaimed debut with the San Francisco Symphony Orchestra last November and their most recent collaborations with Arturo O’Farrill, Antonio Sánchez, Regina Carter, Ana Tijoux and the Afro Latin Jazz Orchestra, the Villalobos Brothers will have just launched their second album SOMOS.

The group’s virtuosic appearances have enchanted audiences in Latin America, India, Russia, Canada and across the United States. They have appeared in venues and festivals such as Carnegie Hall, Lincoln Center, Montreal Jazz Festival, Ford Theatre in Hollywood, the Latin Grammy Awards, the 60th Anniversary of the United Nations, Davies Symphony Hall, the Guggenheim Museum, San Jose Jazz Festival, the Celebrate Brooklyn Festival, the 66th FIFA Congress in Mexico City, the Cumbre Tajín Festival, the Blue Note Jazz Festival, and the Apollo Theater, among others.